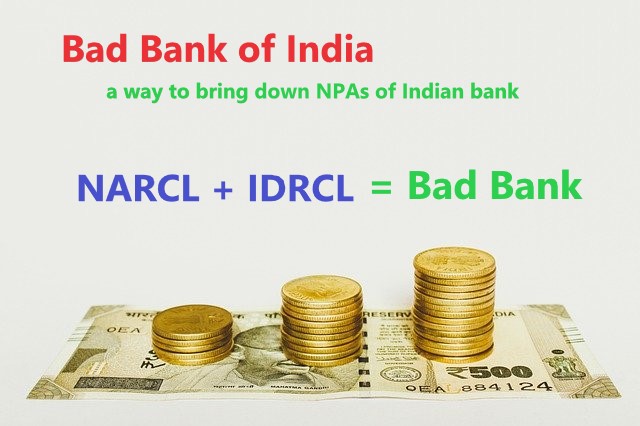 Bad bank is not like normal bank. In banking sector, problem of bad loans i.e. non performing assets (NPA) has increased drastically over the period of last several years and reached beyond Rs.2 Lac crores which banks declared as bad loans not recoverable in their books. Now the govt. of India come forward with scheme of creating bad bank by creating NARCL (National Asset reconstruction Company Limited).

Concept of Bad bank in India

The financial crisis of banks due to un-recoverable bad loans come in lime light when the Reserve Bank of India (RBI) mandated that lenders clearly mention such bad loans as not recoverable in their books as well as in their financial statements so that shareholders of banks can clearly see the real assets position of the banks.

The Ministry of Finance & corporate affairs recently noted that not only the volume of NPAs of PSU banks are large, but same is also fragmented across various lenders and that is increasing day by day. Substantial volume of bad loans or NPAs are giving bad shape and image to the public-sector banks.  Indirectly which means that the government has been using taxpayers money to inject the funds to such PSU lenders.

The Govt of India alongwith RBI was continuously working on the optimal way to tackle this mounting problem of NPAs and increasing losses to PSU banks.  Later on the Govt. of India bring the solution in form of Bad Bank.

Ms. Nirmala Sitharaman, Finance Minister of India announced in her budget speech for 2021-22 about creation of a bad bank i.e. National Asset Reconstruction Company Limited (NARCL), as the solution to recovery of bad loans.

This bad bank will basically work in the form of an asset reconstruction company (ARC) which will adopt the bad loans of commercial banks and other financial institutions, typically below their book values, and it will attempt to recover money from bad loans as much value as possible and return proportionate amount out of such recovery to the concerned banks.

NARCL is incorporated with aims to acquire total stressed assets on Indian lenders’ balance sheets worth Rs 2 Lac crore and the process will be completed in phased manner with regulations of RBI.

NARCL is supposed to adopt bad loans of bank with an obligation to pay back those banks through a mix of 15 percent in cash and 85% in form of security receipts (SRs).

15% cash payment would be made to the banks based on some realizable valuation of such bad loans, and the rest 85% will be given as security receipts which will be backed by guarantee of central govt.

For SR guarantee, the cabinet of central government has approved Rs.30,600 crore for now according to finance minister Ms. Nirmala Sitharaman.

The NARCL will also be supported by the India Debt Resolution Company Ltd. (IDRCL), which will work as debt recovery agency for NARCL and will manage the acquired assets through engaging market professionals and attempting to add value to the assets for final resolution through sales on the market.

Upon resolution, the remaining 85 percent of the assets’ value held as SRs will be given to the banks.

51% ownership of the NARCL will be held by public-sector banks, which will also hold a 49% stake in the IDRCL and the rest will owned by private-sector lenders.

With the creation of both the NARCL and the IDRCL, Govt. is hopeful that it should expedite the resolution process with high speed to achieve the goal of incentivize and fuel to PSU banks as much as possible by gain from improvement in the value of the assets via the IDRCL.

If stressed assets cannot be resold in the market or being sold at lower value than their fair market values, then government guarantee can be invoked to make up for any shortfalls of amount payable to banks.

The guarantee shall cover the shortfall between the face value of the SR and the actual realization. Government of India guarantee will also enhance liquidity of SRs as such SRs are tradable as per the Ministry of finance.

Let’s understand the case with some figures:-

Suppose bad loan value is Rs.20000 crore which NARCL supposed to adopt from a bank under bad bank scheme of Govt. of India which that bank declared as bad asset at their end

Then NARCL do its own assessments regarding that bad loan and evaluate that about 10% of such loan i.e. Rs.2000crore may be recoverable

For remaining 85% i.e. Rs.1700crore, NARCL will issue Security Receipts (SRs) backed by Govt. guarantee for the amount payable to concerned bank within next 5 years

NARCL along with IDRCL is able to recover Rs.800 crore in actual from such loss assets

Margin and expenses of NARCL on such recovery to be kept by NARCL is Rs.50crore

Then the balance amount of Rs.750 crore is paid to concerned bank against 85% SRs proportionately after adjusting the margin and expenses of NARCL on such recovery

Shortfall of remaining amount i.e. Rs.950 crore is to be paid by the central Govt. to that bank according to guarantee on SRs

Please note that for now cabinet of Central Govt. has approved total budget of Rs.30600 crore as guarantee for such security receipts to be issued by NARCL to various banks.

This budget of guarantee amount may be increased by the Govt. time to time in future also.

If in above case NARCL is able to recover Rs.2500 crore which is more than the assessment value of such loan then bank will get its full amount from NARCL after adjustment of profit of NARCL as their incentive for recovery of amount beyond the assessed value of such bad or lost assets to the bank.

In this case there is no obligation on Govt. to pay anything as recovery amount is more than assessed value of such loan.

The summary of bad bank scheme

The bad bank is not like a bank. They are just an Asset Reconstruction Company (ARC) namely NARCL and IDRCL incorporated and owned by various public sector and private banks. NARCL will adopt bad loans from banks and try to recover some money out of those bad loans with help of IDRCL in structured manner:

Why need of bad bank in India?

It is very simple that banks don’t want to “write off” the bad loans to zero because that will invite CBI or ED enquiries. There financial statements will with high NPAs will give bad image to banks and their stock values may go down drastically which will create other cause of financial crisis in banking industry. On the other hand, banks have no expertise how to recover and sell assets of defaulters and realize the appropriate value for them.

There is also big problem for govt. that mostly banks treated them worthless and shown as bad loans/assets in their books. Banks really don’t care about recovery of those loans, may be due to lack of expert or dedicated staff etc. for such big defaulters.

To cop up with this emerging problem where the bank loss have increased drastically beyond Rs.2lac crores, the Ministry of Finance, Govt. of India alongwith RBI come up with this solution to eradicate and recover the bad loans by forming NARCL and IDRCL so that money can be infused to banks and use of tax payers money can be avoided for such bad loans.

This needn’t have had a government input, but the guarantee helps make the SRs tradeable. Otherwise, private ARCs would have done the job, but apparently, none of the private ARCs has bid for all the bad loans in the system and aggregate them entirely.

Is bad bank is good or bad for the government?

In the whole bad loan scheme, you may see that Govt. provides guarantee against 85% amount of security receipts to the banks for any shortfall in recovery of such default loans and budget of Rs.30600 crores has been kept for now, although bank loss is beyond Rs.2Lac crore.

Since NARCL and IDRCL will be owned & managed by the banks with 51% shareholding by PSU banks and 49% by private banks. Now if the management of banks is able to manage NARCL to over evaluate & over estimate such bad loans so as to over pay banks for such bad loans, then it will increase the obligation of govt. to fulfill the shortfall and pay the huge amount to banks against SR guarantees provided to the banks. This indirectly means that taxes paid by general public are going to be used in coming years by the govt.

Let’s be optimistic and hope that the NARCL provides the banks more support so they can do better for general public of India.

Whether bad bank scheme is good or bad for the Govt. is still matter of suspense and its financial impact will come to know in coming years when NARCL will actually start working for the resolution of long time pending bad loans.

Whether bad bank is good for the stock market?

It is natural that it will impact on stocks of public sector lenders who made these loans. Their share prices may go high till the time they realize their actual loss money. Traders of stock market may manipulate general public to increase investment in such stocks by misrepresenting fake financial health of those PSU banks and prices of those stocks may go beyond their real market value.

On the other hand, private banks have already written down & even sold their stressed assets of defaulted loans in their books. They may not need much help from NARCL.

Being the biggest stocks in the bank index they may not benefit in any meaningful way as this resolution process is being built for legacy bad loans given many years back specially by the PSU banks where it is doubtful that private banks will get any benefit out of this scheme.